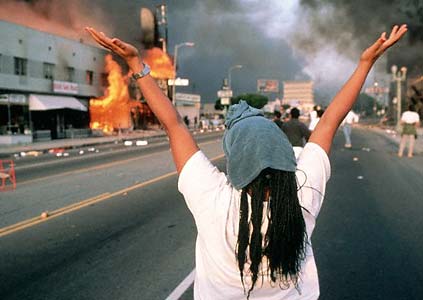 Posted at 18:41h in Beats & Pieces - The Angel History by The Angel 0 Comments

It was April 28th 1992 when Mike Ross, head of Delicious Vinyl, flew me from London to New York so we could meet and discuss a record deal. He and his team would fly in from Los Angeles and meet me there.

On the 29th, they booked me into a recording studio in the city. I always suspected that they wanted to see me in action and make sure I really was doing all my own programming, writing and producing. So armed with some vinyl and dats (those were the days) with my library of sounds and created samples, I headed over to the studio where they’d rented in an Akai S1000 Sampler, a synth of some kind that I’m drawing a blank on, an Atari 1040ST and Cubase. It was there, that I wrote and recorded, “Freedom Is A State of Mind”.

Being in the studio, steeped in creativity, I was blissfully on another planet… but late in the day, I was shaken out of my creative cocoon, when we switched on a TV in the control room and saw Los Angeles in complete chaos. The riots had broken out and Mike and Orlando had barely made it out on one of the last flights to leave the city that day. This was one of my earliest, disturbing introductions to LA, while still living in London, but temporarily back in my hometown in of NY… and it was surreal. The images came with such foreboding and it’s been a bittersweet mixture of loveliness and trauma ever since…