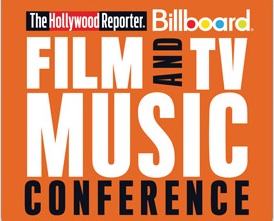 Posted at 18:12h in Film TV & Records - Behind The Scenes, The Angel Sightings... by The Angel 0 Comments 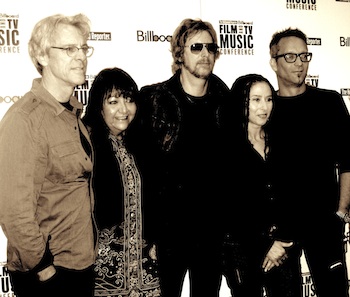 In 45 minutes none of us could begin to scratch the surface of what it’s like to be in the hot seat as a composer, but we all had our own unique take on how we made the transition from one world to the other and how we have fared along the way.

I’d never met Charlie Clouser before and I’m really glad we had the opportunity to speak on this panel together…  as it turns out we’re both big Lalo Schifrin fans. Who knew?  It was great to see Stewart Copeland again. This was the first time we’d had a chance to hang out since we met on “Gridlock’d”, where he was integral in schooling me about the politics in the composing world. More on this is an older blog entry “Gridlock’d” On BBC1 – Back In Time For The Angel

For those who waited patiently to ask me questions after the panel, but never got the chance, here are a few things that might either inspire you, or scare you away from a career choice that looks quite shiny from the outside. Here are some things a composer, who works in both film and television, needs to juggle in addition to writing and producing score.

1) Before you get to see picture and way before you ever get to writing a single note of music, you’ve got to be able to absorb the essence of the project, whether it is a film or TV show. Analysis is the key word. If you can get in early enough, reading scripts is extremely helpful, but not in isolation. The most important thing for me, is to listen to what the director (in film) or showrunner (in TV) has to say about what they are looking to achieve tonally. Talking, even generally, about likes and dislikes regarding certain types of instrumentation narrows down any room for error. I can’t tell you how many times I’ve been in situations where there is one sound or one instrument that one of my collaborators has a craving to hear, or a resistance to.

Example: On “Boiler Room” there was a cue called “Segue To Work” and Ben Younger, my director, didn’t respond well to it. We finally narrowed it down to his dislike for the sound of the organ riff. As soon as I muted that one part, it went from being a problem cue to one of his absolute favorites.

2) We talked about “temp love” on the panel and the difficulties that it can lead to, but on the flip side of this coin, are the projects where the temp music is way off target and you are left to your own devices to figure it all out. Sounds ideal, right? Well, not always. Not everyone that a composer works with, can articulate what they would like to hear in musical terms. Often you need to know just as much about what to avoid as you need to know where to aim. There are usually several disparate viewpoints that you will need to satisfy and unless you are ego-less, a good diplomat and a bit of a mind reader by way of being able to trust and use your instincts, you can drown in the ether out there. I talked about building trust on the panel and I can’t stress this enough. You can’t talk or bully yourself into a trusting relationship with your collaborators, you have to show them and inspire them.

Example: On “Gaia”, director, Jason Lehel had a very specific concept for the style of music that he wanted for a key scene at the end of the film. He was very much emotionally attached to the idea that if it weren’t achieved using very traditional, pristine high strings, that I just wouldn’t be able to capture the feeling that he was looking for. I heard him loud and clear, but also knew that I could find a more unique way to serve his vision there, so I made sure to incorporate the strings he craved, but also created many organic original sounds around the strings to enhance the fact that we were in a very unusual, earthy, seldom seen environment in the film. It was one of the first few cues that I tackled and initially he was moderately resistant. So I let him live with it for awhile and worked on other cues in the meantime… and in the end he told me that he loved all of the detailed sounds and flavors that I had blended into the cue because of their uniqueness, in fact he could barely remember having had any resistance to it. Now there was no manipulation or trickery going on here… I just gave him time to live with something new, so he had a chance to digest it properly and then decide if it hit the spot. Luckily, it did.

3) You finally get a locked picture and you’re spotting the project. This is the most crucial and valuable part of the process for any composer because you can finally pin down all opinions, desires and directives to the actual cut rather than talking about the project in general terms. I personally make it my business to attend all spotting sessions. It goes back to what I said earlier about analysis being key. It’s amazing what you pick up from someone’s throw-away comment that can help you solve the puzzle of where to take a particular cue. The more clarity you can gain during spotting will directly effect the kind of notes you are likely to get; i.e. re-do from scratch versus slight tweak versus no notes at all.

Part B of this section is that your right hand person is your music editor, and on the panel, we never had a chance to talk about the vital relationship between the music editor and composer. The music editor’s job isn’t only to keep track of all the audio files (source music and score) and to compile spotting notes and cue sheets; they also represent you on the dub stage and are therefore responsible for protecting the integrity of your cues… and that doesn’t mean that they need to “get into it” with anyone on your behalf, but they should know your material well enough that if something isn’t translating properly to the stage, they can catch it and, if they are asked to edit something on the spot, they can do so in a way that you would be happy with.

4) Prepare yourself to receive notes and to act upon them expeditiously. It’s essential to learn how to interpret and address notes, so you can effectively deliver while maintaining your sanity. Not everyone communicates notes in the most decipherable way. So, once again, your intuition and understanding of who you are answering to makes a huge difference. In TV you may be answering not only to showrunners, but also to other producers, the studio and the network and they may not all agree with each other. Make sure you know how to get to that zen space and find a way to address everyone’s concerns, while maintaining the integrity of the project as a whole. Additionally, always be prepared for last minute schedule changes, especially in TV, so you know you’ll be able to hit those deadlines… even the ones you didn’t know were coming.

Example: On “HawthoRNe” it looked like I’d have a good few weeks to deliver the first episode, giving me plenty of time to experiment, in order to create a whole new musical direction for Season 2. However, by the time we locked the first two episodes, I had something like 14 days to score both episodes to meet the first mix dates, so that TNT could rush them out to press on time. There was a small cushion for fixes, that we could squeeze on to the end of another episode’s mix date, since we were ahead of our broadcast dates, but essentially, there was no real cushion right from the get go as we mixed every week from the first episode through to the finale.

5) Always expect the unexpected. Preparing yourself for the picture to become unlocked is one thing, but you have to doubly prepare yourself for the possibility that one day, when you’re about three quarters of the way delivered on a project, you’ll get the call saying that they’ve had to shave frames all the way through… So when the big conform comes, you’ll appreciate your music editor even more.

My transition from being a recording artist and record producer to becoming a composer was heavily encouraged by a key person who gave me a solid push and helped open doors for me. This was Bob Knight (Music Sales), who was the head of the film and TV division at Famous Music Publishing, back in ’95 / ’96, when I was signed to Famous, and I’m still grateful for his encouragement to this day.

Honoring Rev. Dr. Martin Luther King Jr. In these turbulent times, feeling especially grateful for his grounding messages of unity, equality, justice and tolerance. Every speech, every quote is as relevant today as ever… #MLKDay #SecureVotingRights

Honor the king. Take action on #MLKDay and help #PassVotingRightsNow!

Please share this quote from my father through #MLKDay2022:

“I think the tragedy is that we have a Congress with a Senate that has a minority of misguided senators who will use the filibuster to keep the majority of people from even voting.”